This research was carried out within the LaSTIG lab., IGN-ENSG, Univ. Gustave Eiffel.

Historical imagery is characterized by high spatial resolution and stereoscopic acquisitions, providing a valuable resource for recovering 3D land-cover information. Accurate geo-referencing of diachronic historical images by means of self-calibration remains a bottleneck because of the difficulty to find sufficient amount of feature correspondences under evolving landscapes. As shown in Figure 1 (c-d), current state-of-the-art feature matching methods (including SIFT 1 and SuperGlue 2) perfom well on images acquired within the same epoch (also refered to as intra-epoch). Yet, due to drastic scene changes and heterogeneous acquisition conditions, they underperform to find feature correspondences across different epochs (also referred to as inter-epoch) Figure 1 (e-f), while our method 3 is able to recover numerous and accurate correspondences Figure 1 (g).

Figure 1. SIFT, SuperGlue and Our features computed on an intra-epoch (left) and inter-epoch (right) image pair. The blue line connecting 2 points from the left and right images represent the feature correspondences.

In the following we present the methodology and some experiments. If you are interested in using our method, please refer to the source code of MicMac Github 4, as well as 2 jupyter tutorials 5 6. We also provide an introduction video 7, slides 8 and project website 9. The datasets used in our publication 3 will be soon published in an open-access repository.

The key idea of our method is to use 3D geometry to guide matching. This idea comes from the observation that RGB images have the following shortcomings:

Figure 2. The same zone observed in different times. The images changed a lot while the DSMs stayed stable over time.

Figure 3. The same vegetation observed in different times. They present non-Lambertian reflection and self similarities, while the DSMs are distinctive.

Fortunately, 3D geometry such as DSM, makes up these shortcomings perfectly. Therefore, we designed a rough-to precise matching pipeline to take advantage of DSMs for multi-epoch image alignment by:

The details are presented in the next section.

Our pipeline consists of 3 parts: intra-epoch, inter-epoch and combined (see Figure 4). For the sake of simplicity, we only exhibit the processing flow of two epochs, however, it can be easily extended to more epochs. The inter-epoch part contains the key developments. It matches the DSMs obtained in intra-epoch processing to roughly co-register 2 epochs, and uses it to narrow down the searching space for precise matching. The final correspondences are then used to refine the orientations in the combined processing (i.e., bundle adjustement).

Based on the image orientations and DSM from each epoch, we match the DSMs to roughly co-register the 2 epochs, as shown in Figure 5.

Figure 5. Workflow of the rough co-registration

To increase the robustness of our correspondences, we do the following:

However, we also considered using orthophotos for the rough co-registration stage. Experiments have demonstrated that fewer matches can be retrieved. This is due to the fact that the scene’s radiometry changes are more pronounced than the 3D landscape’s evolution. Figure 7 presents a comparison of feature matching performed on RGB images and DSMs (more inliers in DSMs). It also shows the effectiveness of our strategy (SuperGlue combined with tiling scheme, followed by RANSAC) compared to the traditional SuperGlue.

Note: For more details, please refer to our publication 3.

We perform a precise matching under the guidance of the co-registered DSMs. Two options (guided matching and patch matching) are provide to get tentative inter-epoch correspondences, followed by removing the outliers with 3D RANSAC and cross correlation. 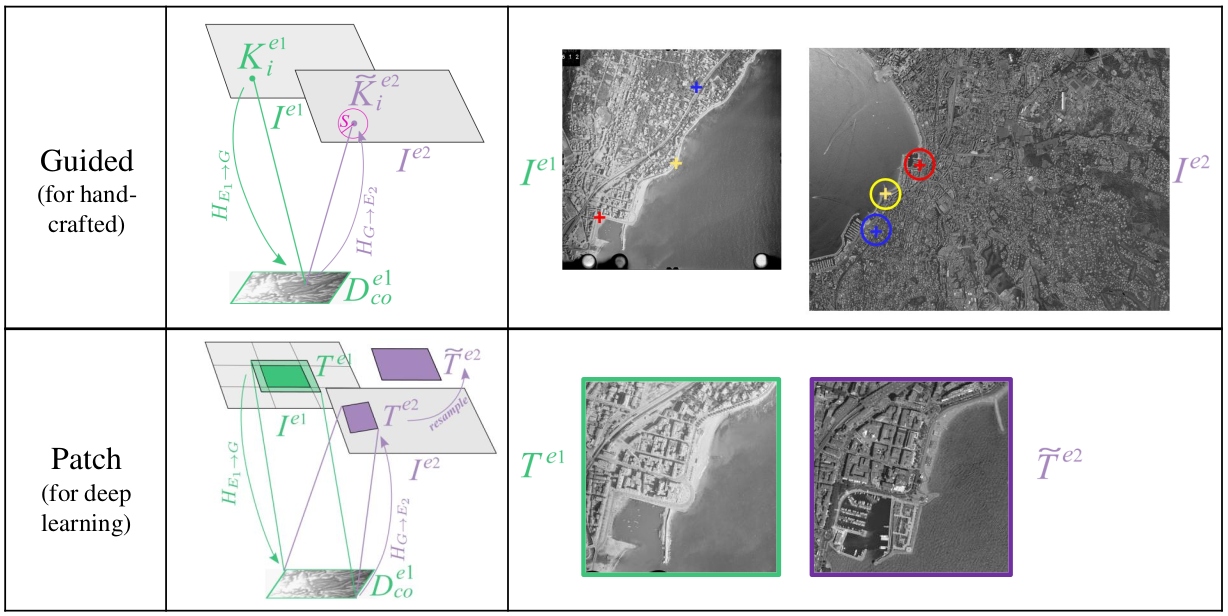 We project the tentative correspondences onto respective DSMs to get 3D points, and remove outliers in a RANSAC routine based on 3D spatial similarity model. 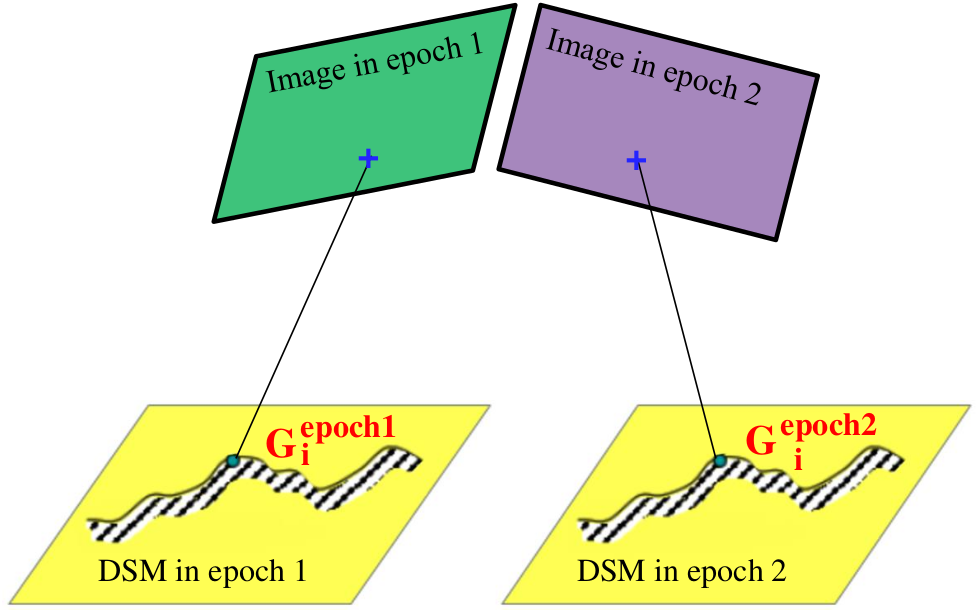 We apply cross-correlation for final validation. Feature correspondences with their correlation scores below a predefined threshold are discarded. The rectangles in the picture below represent the cross-correlation window, false match (red) is eliminated, while true match (blue) is kept.

We test our method on a dataset with drastic scene changes displayed below:

We recover inter-epoch correspondences and refine the image orientations, then calculate DSMs in each epoch and adopt the conception of DoD (Difference of DSMs) for evaluation. Ideally, the DoD should only display the scene changes as shown in the picture below.

But in real case, a doom effect as shown below would appear due to poorly estimated camera parameters.

We display 4 sets of DoDs below.

In the DoD of (3) and (4), the doom effect is effectively mitigated while the real scene changes are kept, thanks to our numerous and precise inter-epoch correspondences.

A subregion of scene evolution is displayed below, a seaport as well as several new buildings emerged and are well detected with our method. 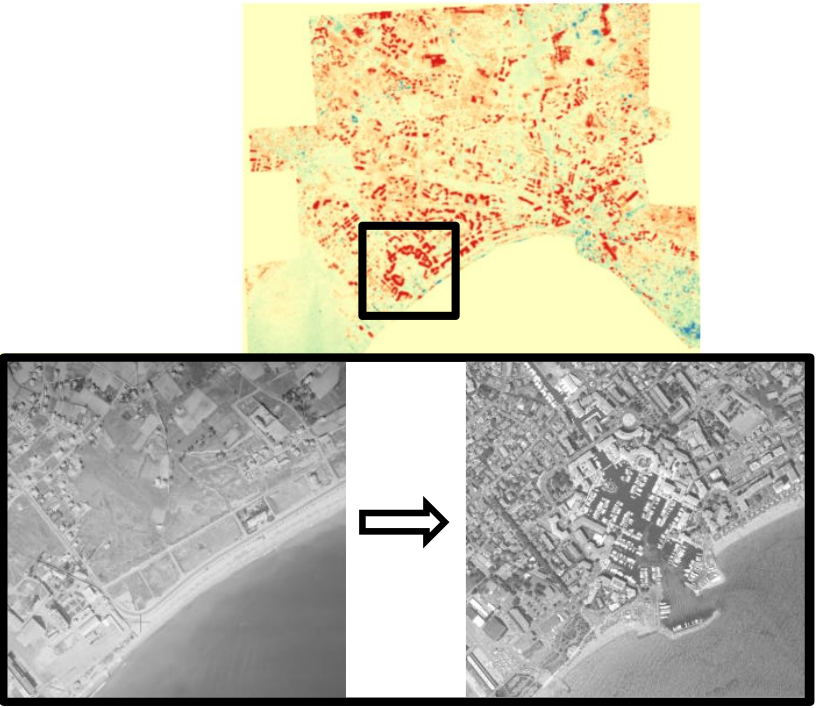 We also applied our method on a dataset that witnessed an earthquake, in order to see if the result is precise enough for detecting earthquake displacement. The dataset locates in the north of Awaji Island, Japan. The well-known Kobe earthquake happened here in January 1995. The dataset is mainly covered with mountain area and narrow urban zones along the sea (see Figure 16). We have two sets of images: pre-event acquired in 1991 and post-event acquired in 1995.

We display 5 sets of ground displacement below.

In (2) and (3), no earthquake fault is observed. However, in (4) and (5), an up-lateral strike-slip movement along the sea is present , which is coherent with (1). It indicates that the refined orientations are precise enough, thanks to our inter-epoch correspondences. 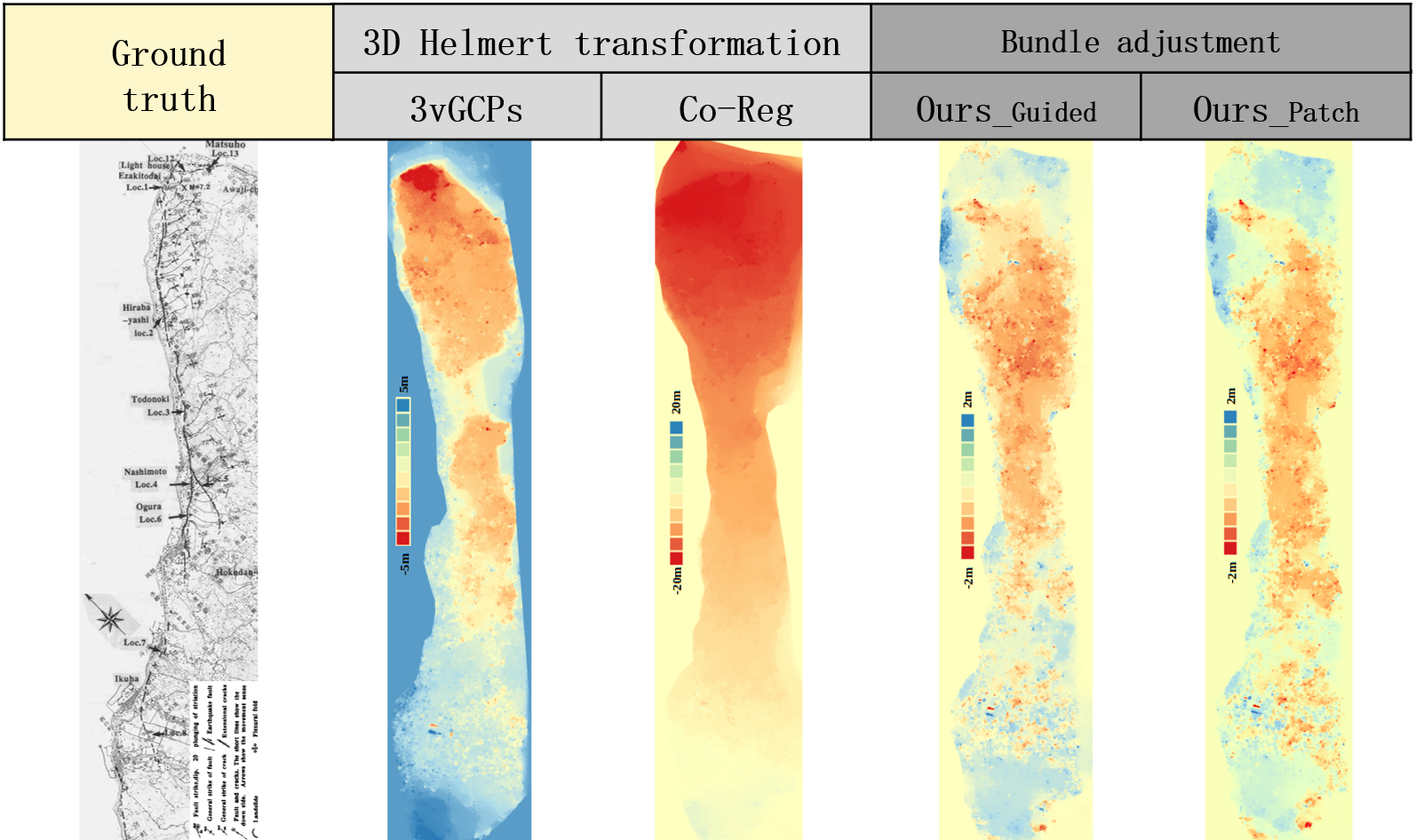 Our method exploited rough-to-precise matching strategy to reduce ambiguity with the help of the depth information. We also introduced a tiling scheme to upscale the learning-based feature extractors to high-resolution imagery, and enhanced the matching robustness by removing scale and rotation ambiguities. Experiments showed that our method is able to mitigate systematic errors induced by poorly estimated camera, and it is robust to drastic scene changes.